My own journey in prostate cancer personally started about a year and a half ago. What I feared about being diagnosed was just knowing that I was going to have to go through the process. I had the same common fears that any patient would have, what are going to be the side effects in me personally.

I had essentially surgery as a choice, and I had radiation as a choice.

I’ve been treating prostate cancer for a long time. And one of the issues we have using radiation in any mechanism is that there are sensitive organs nearby. Primarily we worry about the bladder and the rectum. The problem is the prostate and the rectum live right next to each other. So how do you actually give radiation to one and not to the other?

So, treating prostate cancer is easier if you can keep the rectum a little bit out of the way. When it came to me personally, it was more, you’re not going to treat me unless I have SpaceOAR applied for me. This new mechanism of inserting a hydrogel between the prostate and the rectum in a very minimally invasive mechanism, very minimally invasive manner that allows you to keep prostate and the rectum just a little bit separate from each other, it really gives you an advantage.

"You're not going to treat me unless I have SpaceOAR applied for me."

It was tested in a clinical trial several years ago and proven to reduce the likelihood that the rectum would be irritated as a result of treating the very nearby prostate. So, when I learned about it, it was to me a no brainer. This is going to be a great improvement in how we can do radiation treatment. And I started offering it to my patients. So, it’s one of those kinds of win-wins that we come across in medicine every once in a while, that allows us to improve our outcomes without having to pay a large price in how much is this going to cost or are there downsides to this.

Like most of my patients, once the SpaceOAR was applied to me, I couldn’t tell a difference.

I didn’t have any difference in my bowel function or my urinary function. So, it helped confirm for me, yeah, this actually doesn’t hurt that much. And yeah, you walk out of here almost like it wasn’t done. That’s very gratifying. But knowing then and seeing my own CT scan and I know that we’re going to be able to execute a plan to treat my prostate without including my rectum in part of that planning, it really hit home.

This was not just one of my patients. This was me. This was my pelvis on that screen. And I could see that I was going to be able to treat my prostate more effectively without involving the rectum. So, it was kind of an eye-opening experience.

Finding a SpaceOAR Hydrogel Doctor Near You is Simple

Get started by entering your ZIP code below and click submit. You will be redirected to a map view showing you the nearest doctors to your location.
*Please note, there may be other doctors in your area who treat prostate cancer not listed here. 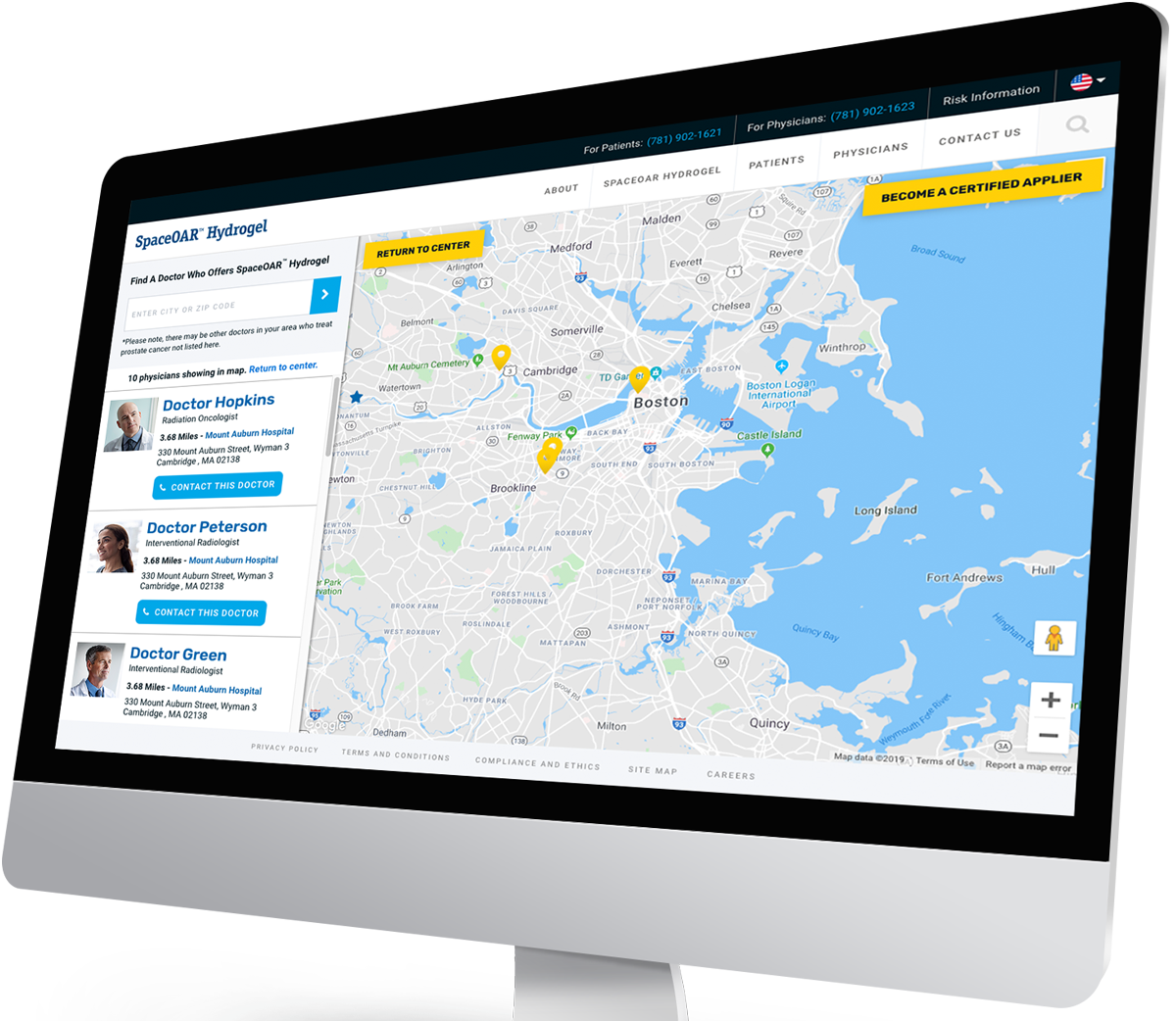 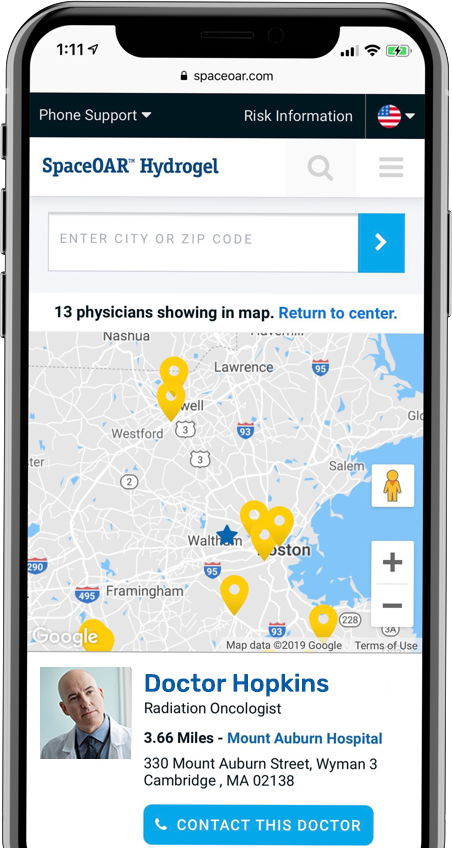 Caution: U.S. Federal law restricts this device to sale by or on the order of a physician.

Content of this video is for Information Purposes only and does not constitute medical advice. BSC strongly recommends that you consult with your physician on all matters pertaining to your health or to address any questions.

SpaceOAR Hydrogel is intended to temporarily move the rectal wall away from the prostate during the course of radiotherapy treatment for prostate cancer, and in creating this space it is the intent of SpaceOAR Hydrogel to reduce the radiation dose affecting the rectum.

SpaceOAR Hydrogel contains polyethylene glycol (PEG). As with any medical treatment, there are some risks involved with the use of SpaceOAR Hydrogel. Potential complications associated with SpaceOAR Hydrogel include, but are not limited to: pain associated with injection, pain or discomfort from the  hydrogel, site inflammation, infection (including abscess), inability to urinate, urgent need to urinate, constipation, rectal muscle spasm, damage to lining of rectum, ulcers, fistula (a hole between rectum and bladder, urethra, or skin below the scrotum), perforation (hole in prostate, bladder, urethra, rectum), necrosis (dead tissue), allergic reaction (local reaction or more severe reaction, such as anaphylaxis), embolism (blood vessel blockage is possible and may happen outside of the pelvis, potentially impacting vital organs or legs), fainting, and bleeding. Please talk to your doctor about the risks and benefits related to using SpaceOAR Hydrogel. If one or more of these complications occur, you may need medical treatment or surgery. URO-1288805-AA